← Photos Up
Beginning of Return Journey to Kennedy Space Center →

During our journey to Florida this past Summer, we decided to throw the Chasing Atlantis Twitter feed on the side of our rental car with some window writers. I thought people might be interested in following our journey online. @chasingatlantis adorned on our Chevy Malibu, we rolled into the Kennedy Space Center, Paul brandishing the HD camera out the passenger window to capture the “John F. Kennedy Space Center” sign on the way to see Atlantis on the launch pad.

It was only a few hours later, while we were shooting within the KSC, that I got a tweet from @whitethunder75, AKA Ryan Horan, who has worked through contract with NASA on the space shuttles themselves. He saw a car with a giant camera hanging out the window and the twitter feed on the side. Ryan was interested about our film and felt strongly that projects like Chasing Atlantis facilitate the growth of the space program’s grassroots.

I remained in touch with Ryan following the trip to Florida and after returning from Sierra Leone. Ryan provided us with some amazing shots of Atlantis following its final mission. But he was also thinking about how it might be possible for us to get an even closer look at the shuttle program itself.

This past Tuesday, Ryan announced that he had made arrangements for us to return to the Kennedy Space Center to get up close and personal with a shuttle in the Vehicle Assembly Building. The remaining orbiters, Endeavour and Atlantis, are currently being prepped for public display. We are not certain which of the orbiters are currenlty present in the VAB but estimates look like it will be Endeavour as Atlantis moves into place for engine removal come November. It would be amazing to get to see Atlantis up close. It was the mission that ended the shuttle program and the vessel we drove across North America to see. But getting to enter that building and see any orbiter up close is no small opportunity. I also think it is fitting that we see Endeavour so close. Watching Endeavour’s landing inspired me to think about chasing down the last mission before the program closed to begin with. All of the travel arrangements have been made and we will be leaving for Florida October 22nd.

We are very grateful to Ryan for his efforts and for believing in our project. We are currently working out the details regarding filming permissions for the trip. If all works well, we will have a whole other adventure to add to Chasing Atlantis that we would have never imagined possible prior to our humble road trip. Thank you, Ryan!

Here are the photos Ryan sent us below: 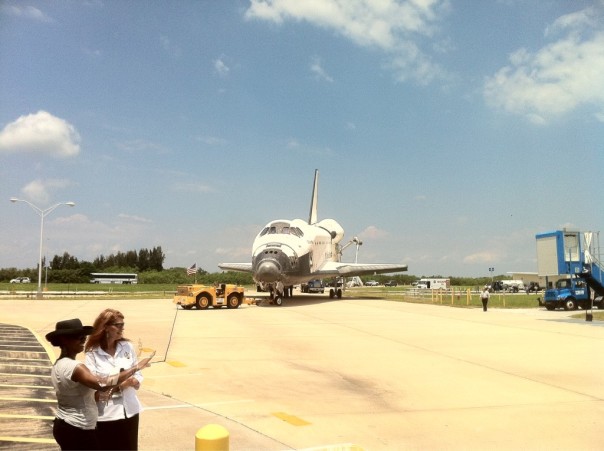 ← Photos Up
Beginning of Return Journey to Kennedy Space Center →