What a way to cap off a career. During Hadfield’s expedition to the International Space Station, he soon became a household name and is credited with making space “cool” again. 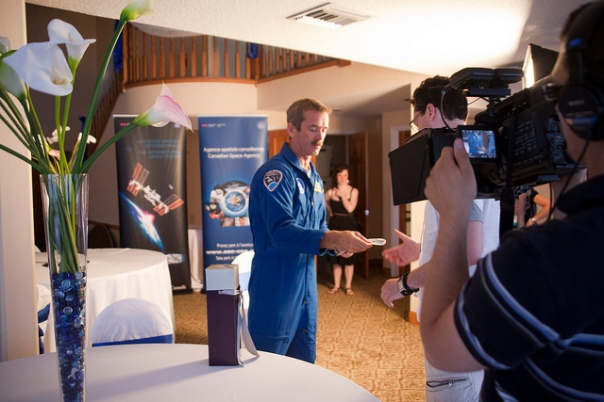 Hadfield became the first Canadian to command a space vessel in May of this year when he took the helm of the ISS. He was also the only person outside of the US, Russia, or members of the European Space Agency to command the space station in its operational history.

Hadfield’s steady stream of incredible images from the space station beamed through social media and recorded music videos from the station, have made him the most recognized name in space since Neil Armstrong.  During our interview with Chris, he reflected on the nature of space travel and how one becomes more, rather than less connected, to the planet despite being hundreds of kilometers outside of the atmosphere.

Chris Hadfield Plays with his Band at a pub in Cocoa Beach we visited just before Atlantis’ Launch (sorry for the blurry shot. It was dark -MC)

There is an incredible image of Chris Hadfield’s welcome home to the Canadian Space Agency’s Headquarters in Montreal today where he held a press conference to announce his retirement and appreciation for his team’s support during his expedition. I’d recommend checking out the entire article in Universe Today.

We are presently aiming for a follow-up interview with Chris before he retires from the agency. Though he may be leaving the Canadian astronaut core, we have no doubt that the impact of his journey in terms of outreach to the public will last into future generations of space goers. You will definitely hear future astronauts say “My interest in space started with tweets from Chris Hadfield while he was in orbit.” Chris will continue to do public outreach on space by speaking to Canadian schools through the Canadian Space Agency. 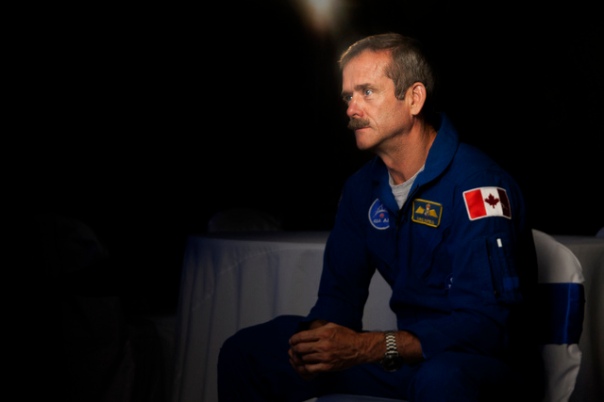 We congratulate you, Chris Hadfield, on a career that dreams are made of.

Posted on June 11, 2013, in Chasing Atlantis. Bookmark the permalink. Leave a comment.