Continuing on our backblogged updates from the North America Tour 2, we’re headed to Space Camp!

As a youngster, the dream of going to space was accompanied by the dream of getting the best training to do so. Where? At Space Camp of course!

Space Camp is located in Huntsville, Alabama. The site was established in 1982 as the U.S. Space and Rocket Center’s education outreach program.

Space Camp is about as cool as you might think it would be; simulated space missions, a moon base, a functioning mission control center, ISS simulator, and…oh yeah…a military grade centrifuge to replicate the same G forces experienced by astronauts on take off. All of these incredible experiences are designed to provide youth with an opportunity to explore their passion for space as well as promote science education.  There is even an adult program for those of us who want to be kids again (or never really stopped being kids to begin with)

We were also able to sit down with Space Camp’s CEO, Doctor Deborah Barnhart. Dr. Barnhart spoke of the importance and impact of Space Camp:

“Space camp is the experience where a young person, maybe for the first time in their life, gets away from mom, dad, teacher, grandmother, whoever wants them to be a dentist in their family, finally comes here and begins to get a glimpse of who it is they are going to be in the future without any input from anyone else. They look around at all these highly energetic and intelligent people and say ‘all these people are going to grow up to be something and so am I’…there is no cooler place on Earth than Space Camp.”

We had a chance to connect with one of the outstanding young people who was in attendance at the camp. Her name is Abigail Harrison, or as her online community knows her as: “Astronaut Abby.”

Abby is a brilliant young woman who is striving to be the first human on the surface of Mars. Her boldness has created quite the following. She has a strong online community supporting her including thousands of followers on her Twitter and Facebook pages. She has even captured the attention of ISS astronaut Luca Parmitano who has become one of Abby’s mentors. (Luca also recently survived an odd malfunction in his space suit during an EVA where he nearly drowned. Talk about grace under pressure…or in vacuum). 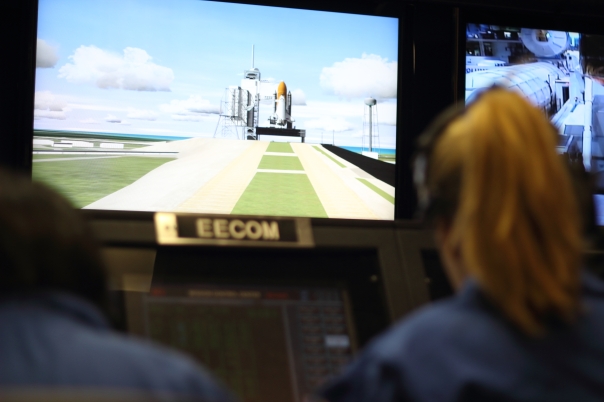 Abby’s infectious energy and optimism really caught my attention leading to our interview with her. Abby’s goal reminded me of myself when I was 16. But where I flirted with the idea of getting to Mars, Abby has fully made this commitment. And she could very well pull it off. The currently proposed windows of hitting Mars would put her there in 2030 at the age of a prime age of 33. Her commitment to this dream has also led her to some incredible opportunities including a speaking tour to encourage other youth to consider STEM sciences and a booking as a TEDx speaker in Tampa Bay next month.

Astronaut Abby performs a simulated satellite repair on the Canadarm

But what if Mars is just out of reach? What if the technology doesn’t materialize, or the funding, or the right government initiatives, or entrepreneurs, or if somebody else gets the role? Would Abby’s leap of faith be in vain? Here was Abby’s response:

Our most sincere thanks and appreciation to Tim Hall, Communications and Public Relations at Space camp for allowing us to film on location and inviting us to be a part of the adventure; Liz for being willing to follow us around all weekend and for being patient with all our questions; to CEO Dr. Deborah Barnhart for meeting with us and agreeing to an interview; and to Astronaut Abby for sharing her dream.