Yesterday marked Star Trek’s 50th birthday! September 8th 1966 saw the first episode of Trek as we know it now with Kirk, Spock…and Bones…though he took that day off. 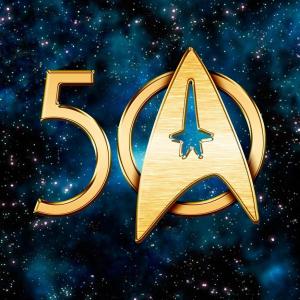 Star Trek has been an enormous inspiration in my life. Trek was what first brought my heart and mind to the stars. Some of my earliest memories are of watching the Original Series movies. The first movie I remember seeing in a theatre was Star Trek IV. I flew a die cast Klingon Bird of Prey around a paper cut out sun suspended from our apartment ceiling to make it go back in time and save the whales. The show was not only my gateway to the wider universe I perceived out there, but the stories of camaraderie and IDIC (Infinite Diversity in Infinite Combinations) became virtues that are foundational to my life. I was raised by Trek. Even when I didn’t go into sciences, my undergrad in international studies was founded upon Trek inspiration. In my mind, the crew of the Enterprise was travelling through the Universe and doing good, so too then would I in the world if I couldn’t in the stars.

To celebrate Trek’s 50th, we’ve put together a tribute video made from interviews with Trek cast, crew, and fans over the years. We’re so humbled by their willingness to be a part of our story especially since I have felt like a part of theirs.